It's release day for Unit 51 and I couldn't be more excited! Or anxious depending upon how you look at it. I'll be updating this blog after my 5:00pm work day with where it's available and links to get there. The same will go for my website. BUT...if I've done my linking right on my homepage, you should be able to click on any of the retailer links, which will bring you to a page where all of my books are available, including Unit 51.

By the way, I've changed up the blurb a tad. Hopefully, it's better. 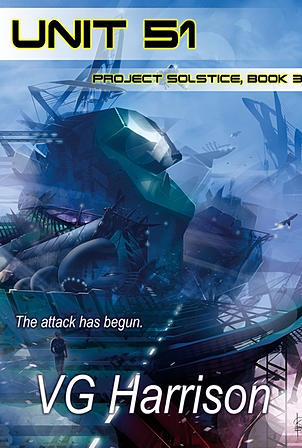 The aliens have stepped up their game via a series of pinpointed EMP attacks, starting with the weapons research base Unit 51. Like the base, Ava learns just how vulnerable she is after another EMP strike not only cuts her off from Ian 2, but crashes her plane. Her only hope for rescue is a small, Canadian town where the residents are werewolves.

They know about Project Solstice, and they're not the only ones. Dozens of supernaturals have joined forces to share not only their technological advances, but to prepare for a confrontation with Project Solstice. When an EMP barrage is launched on the supernaturals’ “safe ground”, it’s proof that the real war is with everyone on Earth regardless of their race.

A temporary truce has humans and supernaturals joining forces. But is anyone safe with paranoia, bigotry, and treachery running rampant among the Unit 51 ranks? Will Ava stay off an alien dissection table after mentally connecting with the alien war ship?